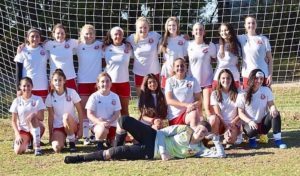 SASL has been around for almost 40 years, but this 2019 Fall Competitive Girls season was unlike any other…

Long time SASL Coach, and now Girls Travel Director, Ryan Patterson has been coaching girls soccer teams for many years; and not just because he has three daughters of his own that play! He is continuously educating himself to provide the best all-around training and skill development for his players. Because of his long time efforts and the efforts of our Girls Coaches and Assistants we are staring at history in the making.

This season SASL was able to put 4…FOUR…girls competitive travel teams together.
U16 SASL Thunder, U14 SASL Courage, U13 SASL Kickers, and U12 SASL Dash.

It may not sound like a lot, but for Competitive Girls soccer in our little town of Sanford it’s a phenomenal feat! But there’s more…I’ll just let Ryan tell you.

“As I sit here and gather info for [an article] on this SASL girls record breaking season I sit here in awe.
Some of the points for the article:

At this point with at least three games remaining we have scored 52 goals by 10 DIFFERENT players. That shows how incredibly well rounded this team is. It also helps illustrate why we are so hard to beat (along with goalkeeping). It’s hard to shut down that many players at once. That’s why it seems there is always someone different in each game that steps up and scores that crucial goal.

Goalkeeping and defense: only  11 goals scored on us all year. That’s an average of 0.78 goals per game which is outstanding!
Just had to share!”

Below are our girls teams stats for the season:

GF: Goals for (goals we scored offensively)
GA: Goals that have been scored against us
GD: Goal differential (GF-GA)

Great Job SASL LADIES!!
We could not be more proud of the incredible season and effort you’ve put into yourselves, your Team, and your Club!